Sorry about not developing her story to great detail,or being confusing, but I am still in the process of figuring her out and her world out. However I wanted to do an official presentation for her since she has been inspiring me so much as a doll. 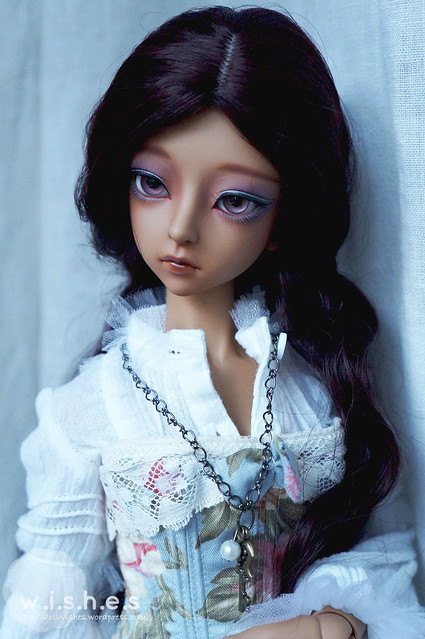 1.Ophelia is part of The Travellers story. She is a dimension traveller that is she travels through dimensions. She got the travelling key (that she keeps on her neck) from her father, that is one of the high ranks of the secret association that regulates Dimension travelling, called Abyme. In her world it is not widely know that it is possible, just a few know about it.

2.Her world is different from ours, it is kind of Steampunk-ish looking world (I will develop it further soon). That is why she is very classic in the way she dresses, even when she lives in our dimension.

3.She travels to our dimension and she meets Penelope (who will be my incoming Feeple60 Chloe), that is a witch but still doesn’t know about it, and she is the only one who can help Ophelia go back(more on that soon).

4.She is very proper and precise; she loves things to be perfect and done her own way. She has been like that since she was little, she was not the kind of kid to do silly games and get dirty.

5.She is a scholar, she keeps her head in books most of the time, and she is really bright. She loves the scientific and investigation side of dimension travelling, and she lives basically for it. Also she thinks magic is overrated in comparison to science.

6.Her favorite color is burgundy.

7.She is really curious about everything. She grew up in a house full of secrets and mystery, and there she developed a taste for the unknown. So much that when she was 10 (and she didn’t know about the travellers yet) she found her father’s key hidden in his study and she used it opening a door to a different dimension. Her father stopped her before she could enter and get lost but he obviously had to explain everything there and then about what it was about, because little Ophelia did not stop asking questions and he was afraid she would go around asking about it.

8.She takes after her mother physically; she is almost the exact copy of when she was younger.

9.She has a big crush on one of the younger time travellers, even if she doesn’t want to admit it. She thinks it is a waste of time to worry about love and that sort of thing. She never was in a relationship, also because in her world courting is still very traditional. Not that she didn’t have proposals, but she refused all of them.

10.She is an only child and she is really close to her mother and especially her father, who is her role model.

I just remembered I didn’t post her good pictures here!

Not the best pictures but the light wasn’t helping at all! However I wanted to take some good pictures of this girl asap!!! Hopefully will take more soon and present her officially 🙂

I am totally in love with her, she is sooo amazing it doesn’t seem real that she is my doll! And surprisingly I love her size ❤

However, she got me thinking about my collection and I decided to sell a couple of dolls! Find out more in this video or on the links below:

Yeah… I decided to put 2 dolls up for sale, my new Ophelia made me wonder about my current collection and I think it is for the best! Here is all the info, if you are interested or want more info please contact me on DoA or e-mail me here: sofia_gpinheiro@hotmail.com (I ship from ITALY)

OMG!!! I am totally in love with her!!! I will present her soon, she is my Luts Delf Arwen in Light Tan Skin and with the default face-up 🙂

Sorry about the crappy phone pic but the light was already gone and terrible for pics (hopefully it will stop raining, it has been raining for 2 weeks without stoping) …I will take some proper pics as soon as possible (hopefully tomorrow?)!!! 😀

Oh! And my Azone doll shipped, hopefully she arrives soon!!! 🙂

Here is her BO video:

Finally have time to do Emi’s presentation! I have been busy with my thesis lately… 1 month to go and I will present it, so it’s the most stressful part!

I don’t know if anyone remembers her (she used to be a JerryBerry Berry, but for a short time),I decided to re-shell her keeping her backstory with some minor changes.

Here is a small introduction: Emi’s complete name is Émilie Marie Mignon and she is 14. She is French, born is Paris, but she is currently living in Milan, Italy (she has italian grandparents on her mother side). She is quiet and calm, and very positive about life (and maybe a bit naive). She loves pink and pastel colours. She is also a dreamer, dreams of traveling the world and being an artist to spend her life doing beautiful things ❤

I am loving this girl: like you probably already know, I bought her at this year’s LDoll Festival, she is a Another Space 43cm Peanut in NS, and she came with a fullset and an extra outfit+shoes (which was pretty cool!). I kept most of her fullset look, since I love her default wig on her! I just changed her eyes to CiG glass eyes (she came with dark brown acrylics that were too dark). I love her sweet and intelligent smile and how delicate she is! I know these dolls are not very famous, but I totally recommend them. Feel free to check this post I made about her body in case you are curious: https://dollwishes.wordpress.com/2013/10/09/another-space-43cm-body/

Extra pic of her fullset:

As I managed to sell my Pukifee Luna (Xagadoll Lara is still for sale, check her here) at a good price I manage to put my new JID Owen on layaway!!! YEY! He will be real skin and with the default B face-up!

I am so happy! I currently have 2 dolls on layaway that I am totally excited about!!! I have been developing my Arwen’s character a lot and looking for clothing for her, she will be kind of romantic and “steampunk-ish”, so it hasn’t been quite easy but I managed to find some stuff and already bought an amazing dress from Lelahel for her! I have been eyeing some Dollheart stuff too…hehe.

My JID guy will be part of my Narae’s story (their names will be revealed soon), so he will have a pretty unique style as they live in a completely different world from ours (mixed between vintage/steampunk and dark). I saw some stuff over at Iple that I love for him but I need to search a bit more what fits these handsome men! I am planning on doing some moodboards for their style, if I have time 🙂

With all these new dolls and plans I am kind of feeling overwhelmed by the old ones…sometimes I get the feeling I have too many dolls to give them the attention they deserve. I don’t want to sell anyone else though, especially not the characters from my stories, so I decided that I will buy new dolls only if they have a strong purpose from now on, that are an important part of one of the current stories or that have a special meaning to me. This way I avoid the frustration feeling like I “cannot” sell them, even if they don’t get a lot of attention (it’s hard to explain, hopefully you get what I mean). I could just say I won’t buy more dolls, but you all know how that ends… 😀

The previous post was getting HUGE so I decided to split it in two parts, you can find the first one about the dolls I am letting go here: https://dollwishes.wordpress.com/2013/10/18/new-doll-plans/

I have been lurking over the Luts Delf Arwen for a while now and after looking at her first owner pics I felt I had to get one! So she will be my Christmas present hehe! I totally put her on Layaway today: she will be in light tan and will come with a face  up! Luts has amazing default face-ups lately ❤

I am just a bit nervous because I find that SD is not really the perfect size for me, however I wanted to give her a chance, not only because she has this amazing beautiful tan (<3) but also because maybe I feel more frustrated with SD because I have such a hard time finding stuff for my Serena (Iplehouse Bianca). If I like having her I am planning maybe getting also an SD boy (YES a boy) because in her story she is in a couple. Let’s see! Still a long wait to go!

Another doll I am adding to the wishlist is another boy! (Another boy??? OMG what is happening to me :P)

I am considering buying a JID Male, probably an Owen (maybe a Boris) because I have been wanting a partner for my Narae, since in her story there is a very important male character and later they become a couple. I would love a great realist (to fit her style) real skin Iple guy for her!!! Lets see how this plan goes…

Finally I found Izzy’s default eyes!!! YEY!
Now just the wig is left…anyway, I am kind of linking her look more even with this wig!
This time they are from Leeke.

Here are some pictures of the little girls wearing some new clothes and stuff from LDoll, plus the new eyes 🙂

By the way, since we are talking about eyes, check out the new site for Captured in Glass, it looks awesome! I totally recommend Lu’s products 😉